In my opinion, one of the most intriguing of all the sharks.

This uniquely fascinating sea creature, in my books, is one of the rarest and most intriguing of all shark species yet to be found. This somewhat repulsive predator is probably the most unpleasant looking of all its known counter parts. However, that being said, further investigation into the life of the Goblin Shark, shows us that looks can ultimately be deceiving.

When one first lays their eyes on the unsightly animal, our thoughts waver uncontrollably to prehistoric times and rightfully so. These frightfully looking animals are a rare species of deep sea shark (Mitsukurina owstoni), often called a ‘Living Fossil’. It is the only member of the family Mitsukurinidae, which is still around, 125 million years old lineage. Now that is impressive!

The Physical appearance of the Goblin Shark is what intrigues me the most. It has a pinky colouration, making them extremely unique, ranging from pinkish grey to almost a bubblegum pink; some would even say so much so that it this colouration is not a true characteristic of sharks. But here is the catch – it is not a pink pigment we are observing in these sharks, but a translucent dermis!

The transparency of the skin allows us to see the colour of the oxygenated blood within the Sharks capillaries (tiny, tiny blood vessel), so in effect, we can see through the skin of shark!

The structure in and around the mouth (or snout) of this shark are just as distinctive. If you have seen a picture of the Goblin, you would understand what I mean by snout. It has a large overhanging snout like feature that is both elongated and flattened, forming a somewhat blade like appearance. The mouth is fitted with long, slim, remarkably sharp teeth, not much different from fangs, and there jaws are both soft and delicate. The aforementioned snout is also littered with extremely electro -sensitive ampullae of Lorenzini – micro receptors that pick up electric fields. The size, shape and structure of the snout of this shark, has given rise to many nick names – some of which resemble Goblins, Elves or Imps.

What fascinated me most about this unique little creature are their protruding mouths. Now to understand this ability, one needs to literally see the shark in hunting mode, because this is truly a magnificent observation to be a part of. The mouth literally extends outwards from its body, moving independently. Now as not much research has been collected from this shark, we can only presume a few certain details. One is that their eyes are small enough sense and possible movement, or flicker that might giveaway potential prey, and the other is that they remain motionless until the prey has come into close contact, and then in one foul sweep, they lunge their mouths outwards, and simultaneously suck their prey in. It is a fascinating thing to watch. 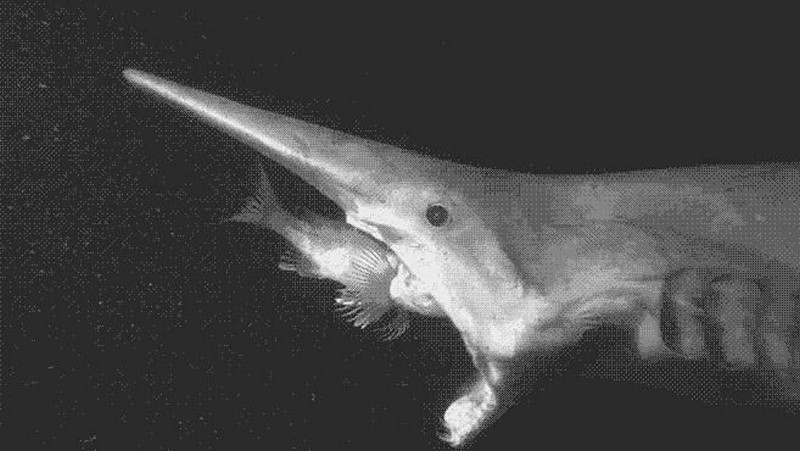 Not a lot has been reported on the shark’s diet as there haven’t been enough caught to investigate the stomach, and the digested food. But from what we can tell, they enjoy a diet of crab, rock fish, octopus and tiny bone fish that live very deep down in the sea.

The Goblin Fish is Ovoviviparous – meaning its embryos hatch from their mothers eggs, in the uterus, giving birth to live pups. And surprise – this is the only bit of information available!

I think what I love about this particular Shark is how little we know, and how suited they are to their environment. The historical background as well as the fascinating bodily structures, gives rise to the feeling that these sharks are beyond evolution, and have survived for millions of years as prehistoric animals, living out the eye of preying humans, which is probably why they have survived for so long.