Predation of the Great White Shark

As part of a larger study instigated by Rob Lawrence of African Shark Eco-Charters and a colleague, predator-prey interactions between Great White Sharks and Cape Fur Seals at Seal Island, False Bay, South Africa, were investigated by direct observations of ad libidem encounters between these two species at the surface during August and September 2000.

Predatory events were usually first detected at the surface by one or more of the following indicators;

Upon detection, the research vessel was piloted toward the one or more indicator(s), approaching as closely as possible without manifestly altering the behaviour of either shark or seals. During a predatory event, every effort was made to avoid blocking a seal’s escape path to the Island.

Shark length was estimated by reference to the width of the research vessel, which measures 2.5 metres from gunnel to gunnel. Outcome of each attack was categorized as either an unsuccessful Attempted Predation (AP), in which the seal escaped, or a Kill (K), in which the seal did not.

As noted previously, two basic types of porpoising have been noted at Seal Island.

Thus, this behaviour may be a way for seals to maximise sub-surface vigilance and thereby reduce their vulnerability to Great White Sharks.

Once a kill had been made, proximity of the vessel did not seem to significantly affect the shark’s behaviour. 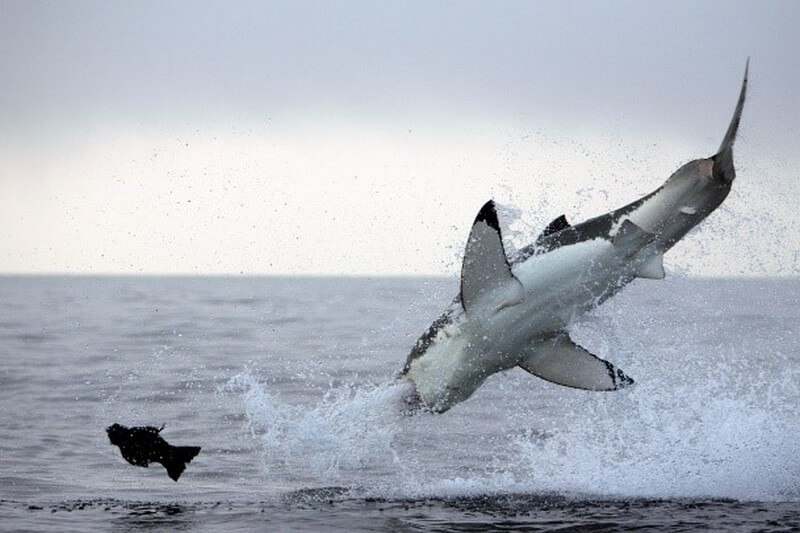 Seal Island in False Bay provides a unique natural laboratory where Great White Shark predation on Cape Fur Seals and intra-specific interactions among both species can be readily observed in intimate detail from relatively close distances. Due to the large number of White Sharks and Seals in the region, ample opportunities exist here for in situ experiments on such matters as sensory discrimination, cognitive psychology, space utilisation, population size and structure of either (or both) species.

Join Rob Lawrence and the African Shark Eco-Charters team on one of our popular “Airjaws” trips and witness the predatory interactions between the Great White Sharks and Cape Fur Seals first-hand.

Data collected and observations by R. Aiden Martin of the ReefQuest Centre for Shark Reasearch, as well as Rob Lawrence.