The Broadnose Sevengill cow shark… its all in the name. 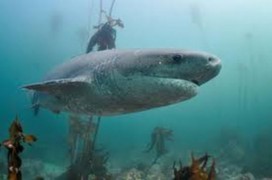 This is an astounding shark to dive with its primitive looking and calm slow movements. This shark was primarily seen in Cape Town in the shallows and in the stunning protected reefs in the Kelp forests along the Cape Peninsula marine reserve. However, in the last few years, they have moved to Seal Island and we have been privileged to be able to dive with them on our shark cage diving trips.

as named has 7 Gill slits rather than the standard 5 Gill slits most shark species have. They have a large round body with broad wide nose and comb-shaped teeth. Growing up to 3,3 metres in length, much more friendly than its fellow shark.

The Sevengill cow shark in its self is a very rare prehistoric looking shark that not many can say to have seen or swam with, this is an excellent opportunity to have a look a shark that has stood the test of time and gracefully roams the oceans. Although not as popular or glamourised by Hollywood as the Great White shark it still is quite a beauty. Sevengills are exceptional creatures that are not known for human interaction, but are behaving uncharacteristically by doing so now, this is a once in a lifetime opportunity for the Sevengills to steal the lime light from the Great Whites and display that sharks can be friendly too.

These beautiful sharks are ancient with evidence linking them back to the Jurassic age from over 150 million years ago so diving with them is a real treat just for this reason alone. The sharks are active hunters and predate. Known as bottom feeders they feed on sting-rays, smaller species of sharks and seals and are known to hunt in packs when taking out large prey.

Sevengill Cow sharks is in False Bay, Cape Town, South Africa. The sharks roam in the kelp forests along the cape peninsular coastline close to Millers Point. These sharks are still present in Japan, China, Australia, New Zealand, Argentina and South Africa and the best place to see them is South Africa in the Shallows.

Join us for a once in a lifetime opportunity to meet unique aquatic creature in its own habitat Sevengill sharks will resort the favour and reputation of the blood thirsty monster painted by social capitalists. Very little is known about these shark as they are bottom feeder and hide.

Sevengill cow shark should be considered the ambassador for the shark as their gentle tranquil nature is indicative of a shark’s true nature. Unknown too many people sharks are not aggressively on the prowl looking for their next meal, killing and destroying anything its path (that would describe a little more the average man in their pursuit for money).  Sharks mistakenly attack humans not maliciously, but rather though misidentifying a contact, this is evident because after an attack sharks don’t return to finish you off or consume the remains. Instead they swim away and continue to investigate and learn as we do. It is unfortunate that their touch does lead to injury and or death, but not the Sevengill cow shark it is a true representation of a shark’s nature.

Against all that is “normal” we have been visited by these pre-historic looking, gentle sharks at Seal Island lately in the absence of our glorious Great Whites. Not to say that it hasn’t been wonderful, it’s just been different, as Cow Sharks tend to spend most of their time in deeper waters and kelp forests, as mentioned above, only coming into shallower waters, it is believed, to breed. They are also nocturnal hunters, so to have them entertaining us, at Seal Island, is a treat we cannot ignore!

They are called the “pre-historic” shark as a result of the fact that it’s skeleton is similar to that of fossils found of extinct sharks.

Also they have a relatively primitive digestive system compared to other sharks, almost as if evolution hadn’t caught up with them yet, and they boast 7 gill slits as opposed to the “normal” 5 as found with others in the shark family. The reason for the extra slits, whether they serve a purpose is not known, other than another throwback to prehistoric times.

Two of the 4 genera have small eyes while the other two have large eyes. The Bluntnose Sixgill actually has eyes that glow a florescent green/blue colour, very cool! The teeth differ from upper to lower jaw, with the upper jaw having smaller, more pointed teeth and the larger comb-like ones in the lower jaw.

This means that though they have egg casings, the female will carry these casings until they hatch within her, at which time she will then birth them. The Bluntnose Sixgill can have up to 100 pups in one litter. How long a gestation period, is not known and when they reach maturity, is not known.
They enjoy a diet of relatively large fish of all kinds, including other sharks, as well as crustaceans and carrion.
It is possible to free dive with these sharks, and we would be happy to make that a possibility for you too. It is recommended to have a scuba certification to do a kelp and Cow Shark dive, though not a necessity. As we are cage diving with them at Seal Island, we feel it prudent to keep you in the cage, as Seal Island is the temporary home of the Great White.

So for the sake of these gorgeous pre-historic, sock-like puppet looking sharks, let’s keep our oceans clean, safe and home to all that live in it!

Trade our violent nature in for a peaceful and realistic portrayal of sharks.

In society we as a human race are attracted to violence and danger this is evident in the world today, and so sharks are portrayed as a mirror of what we choose to reflect. So come and do a shark dive see if your perspective of sharks changes. See if we can trade our violent nature in for a peaceful and realistic portrayal of sharks.