Skip to content
Through the years, False bay has become synonymous to some, as Cape town’s whale and shark central, due to its diverse marine wildlife activity. Each year the False bay coastline is frequented by a number of whale species, making for exceptional whale-watching prospects. Locals and tourists flock to the False Bay area and are treated to an array of activities by these magnificent mammoth creatures, these include, breaching, spy-hopping, fluking, lob-tailing and spouting.The False bay coastline has exceptional whale watching spots. Opt for the higher vantage points along the majestic and vast False bay coastline such as Cape point, Boyes drive, St James, Kalk bay and Simons town. Or better yet, enjoy a boat trip with these magnificent and spectacular mammals swimming alongside. It will leave you in awe and will be an experience never to be forgotten, not to mention, that it is a great photo-taking opportunity.

The most common species visiting the Cape waters is the Southern right whale, they were declared an endangered species in 1953. The name ‘’right’’ whale was given during the 1800 whaling years. It refers to the fact that these whales move relatively close to the shore and swim at rather sluggish speeds, making them easy targets to entrap. Though weighing 23000kg their carcases float, making it easy to transport them as they yield a high quantity of oil and bone. Each year these dark grey or sometimes even black titans, who are distinguishable by their callosities (rough patches of skin covered in barnacles) and lack of a dorsal fin, return to the warmer False Bay waters between the months of June through November. Here they calve, nurse their young and mate and it is an ideal opportunity for them to escape the icy cold Antarctic winter. They are most prolific near the shore in the spring month of September. They are seasonal feeders, eating in winter and living off their blubber in the breeding months. Southern rights are able to communicate with each other by producing low-frequency sounds. Scientific name:  Eubalaena Australis Length: Females- 15 metre, males-14 Gestation period:11-12 months Speed: 3-9km/h Lifespan: 50 years Feed:  copepods, krill, mysids and plankton 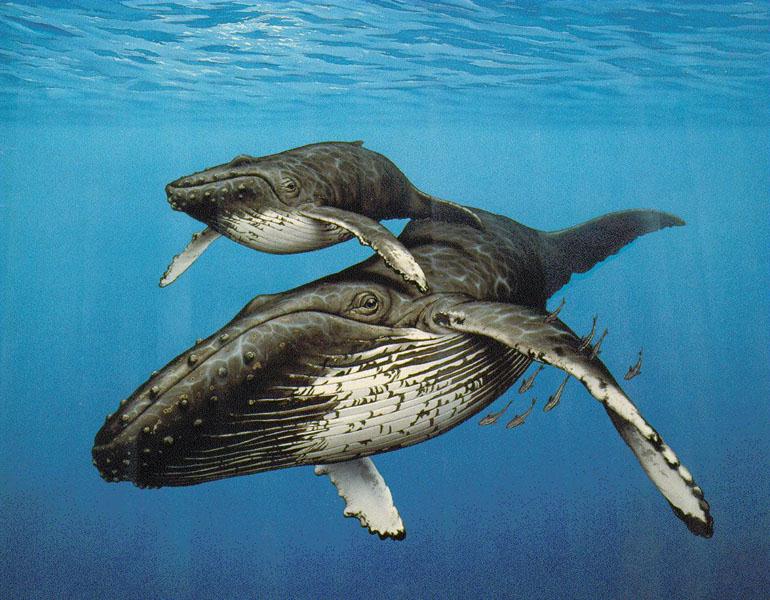 Whilst on its migration voyage, from the icy polar regions of the Antarctic, to the warmer Madagascan and Mozambican waters, the Humpback back whale is yet another species that visits the scenic False bay coastline between the months of May through November. These mottled black or grey colossuses, with white undersides are distinguishable by their long sloping hump on which a petite dorsal fin can be seen. Another characteristic, is its prominent flippers which are approximately a third of their body’s length.  Humpbacks are known for their melodious whale songs, however unlike their male counterparts the females do not sing. Males change their call patterns annually. They are used as a means of communication as well as to attract females. They usually occur singly or in small pods. Humpbacks are the acrobats of the ocean and are renowned for entertaining crowds by “breaching” (jumping clear of the water) and “lob-tailing” (slapping the water with their tails). They also “spy-hop” (poke their heads out of the water). Scientific name: Megaptera Novaeangliae Lengths: Females -13.7 metres, males-13.1 metres Gestation period: 11 months Speed: 5- 15 km per hour. During feeding, they’ll slow to 2 to 5.5 km/h. Able to reach 25km/h Lifespan: 50 years Feeds: small pelagic shoaling fish such as sardine, anchovy and maasbanker and unlike most other whale species, they feed throughout the year.

Bryde’s whale, otherwise known as the Tropical whale or Eden’s whales are the only species of whale that are present in False bay all year round. These resident, non -migratory giants are not easy to spot, as they tend to dive for long periods and surface only briefly. They are identifiable by their sleek, dark grey body whilst being white on the underside and having three 3 ridges near their blowhole. Bryde’s whales are able to hoist their entire body out of the water in an acrobatic display of power and dynamism when they breach. This is a fantastic sight to witness for onlookers. They are commonly found singly, although when feeding, small groups are formed. Scientific name: Balaenoptera Edeni Lengths: Females -14 metres, males-13.5 metres Gestation period: 12 months Speed:  1.6 to 6.4 km/h but can reach speeds of 19 – 24 km/h. Lifespan: 50 years Feed: krill, copepods, shrimp, crabs, herring, mackerel, sardines and anchovies.

Though having the name Killer whale, contrary to popular belief, these giant black and white mammals are in fact the largest dolphins. Their short rounded heads and very short beak contain 10 to 13 conical teeth in each jaw. Their most distinguishable characteristic are their dorsal fins which enlarge as they mature. Like all dolphins, orcas produce whistling and clicking sounds. It is thought that the whistling is used for communication with other group members, and the clicks for ‘echo-locating’ prey. In South African waters they habitually assemble in small groups of 3 or 4. Orca packs appear to disable their mammalian prey by biting the flippers or flukes and then attempt to get to the tongue, which they particularly enjoy feasting on.Little is known about the migratory patterns of Orcas as their movements are unpredictable. Scientific name: Orcinus Orca Lengths: Females -7.5 metres, males-10 metres Gestation period: 12 months Speed:  30km/hr Lifespan: 50-80 years Feed: fish, squid, sea birds, seals, dolphins, small whales, shark liver.