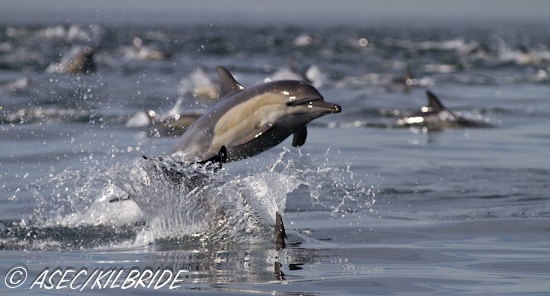 The weather man once again called it wrong and a little rain was had this morning, but had luckly cleared by the time the guests got onboart our Boat.

Running out to Seal Island, we bumped into 200+ Common Dolphins we spent a few minutes with them and then headed inshore to find some Great White Sharks that cruise around Seal Island.

Arriving at Seal Island, the decoy was set for our decoy tow, alas nothing today. We had a look at some seals and noticed an aborted Cape Fur Seal on Seal Island, the Black back kelp Gulls were feeding on it, this happens occasionally. The seal either gets washed off and the sharks feed on them or they will get eaten by the Kelp Gulls.

We achored in the channel today, being the calmest spot with the north west wind blowing. We decided to move after 40minutes of no shark action and again a great move it was.

At our new anchoring spot we picked up 7-8 different Great White Sharks all giving us a great show, going on the decoy on the top and the main bait, us being very clever in not letting him get anything, we try not to feed the animals as much as possible.

On the way home we ran into about 800+ Common Dolphins all doing there thing and jumping spinning and generally giving our guests a great show.

Not a bad way to end the days trip.